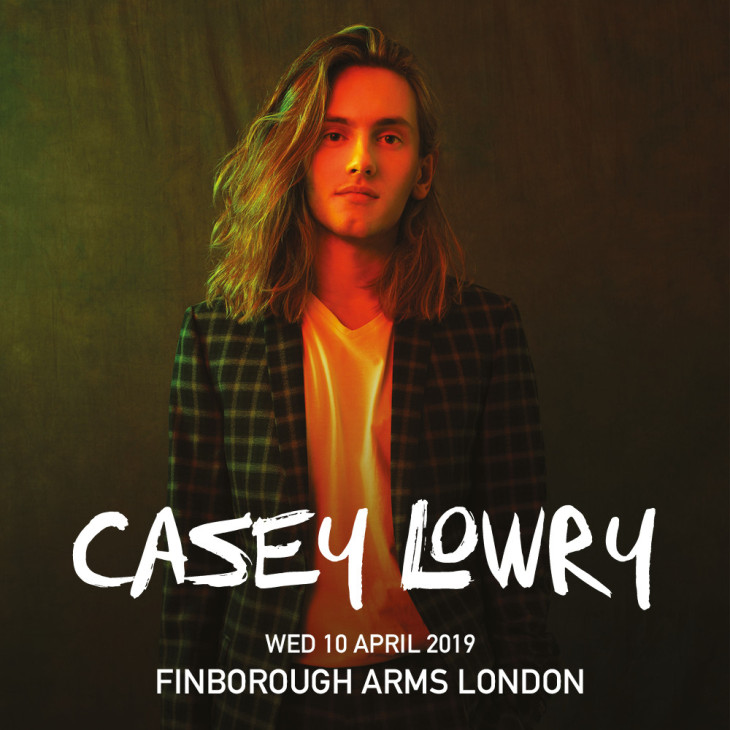 As a child growing up in Derbyshire, Casey Lowry didn’t so much tinker about with music as throw himself into it headfirst. That level of commitment has informed his approach ever since. Singer, songwriter, multi-instrumentalist, Casey knew right from the off that it was music or nothing.

At the age of 14, Casey wrote his first song, Trampoline. He tells you this this almost casually - about a song that, on its release last year, was playlisted at Radio 1, reached No 2 on Spotify’s UK Viral 50 chart and has racked up more than 500,000 streams. When he wrote the song, Casey was in a covers band in his hometown of Chesterfield. Some instinct in him, he says, made him keep Trampoline for himself. Not that it would have suited the band, he thinks - which was chugging along, playing in local pubs. “Every musician needs to go through that experience, it teaches you so much, both good and bad. We played Mr Brightside, Wonderwall, Pompeii - all the classics. And we were absolutely terrible.”

By this point, Casey’s musical tastes were changing: the artists he grew up listening to, often involuntarily, were giving way to new influences. His mum and dad, he says, played “Motown, every day in the car on the way to school. And my dad is obsessed with Elvis. It took me a while to realise that I didn’t like either Motown or Elvis, and that I had to find my own thing. I was friends with this lad who played guitar, and he was listening to bands like Arctic Monkeys, Drenge, so I sort of followed him along that route. It was very eclectic, what he listened to: indie, metal, Stax, jazz. Talk about a steep learning curve. And you’re absorbing everything, often without knowing it. It’s only recently, working on new songs, that I’ve realised I’ve sort of come full circle, because I can hear Motown in them. Which shows you how mysterious music can be.”

All the while, Casey’s academic work was … well, it wasn’t exactly thriving, put it that way. “I did so badly at school,” he winces. “But then, I don’t think it was meant for me at all. I actually got a U in Music, how funny is that?” But music was too demanding a master for any other distractions. Sitting in his bedroom, recording songs, was all Casey wanted to do. On Trampoline, and the subsequent tracks Up & Down and Confused, he played every single part. He wasn’t bothered by the insularity of his life, he says. “The thing is, I’m a real only child. I can forget other people are around sometimes, I’m so much in my own little bubble - which is good for music, but not so much for other things.”

As Casey’s writing developed, and his profile grew, he came to a realisation that, to stand a real chance of making his mark, he needed to move down to London. It was an easy decision to make, he says, though he misses the intimacy and sense of community of his old life. “To be successful in the North is so much harder than it is down here - there’s no getting round that. To get a manager or label or agent to come up and see you, you have to already be selling out large venues, but of course that can take years, so that’s a non-starter.

“I’ve known so many amazing bands who are based there, especially up the road in Sheffield, and they’re not getting anything like the attention they deserve, which is just soul-destroying for people with that amount of talent and passion. I sometimes think there’s almost this dividing line: anything above Leicester is going to get ignored. And that’s just wrong. I got to the point where I just thought: ‘Right, that’s it, I’m moving.’ And I immediately got on the coach to London.”

Eight months after arriving in London to a blizzard of interest from management, labels and publishers, Casey is now a priority for Access Records, the joint venture between Sarah Stennett and Len Blavatnik. Now comes the next stage, and a clear and emphatic pointer to Casey’s future. Me & You, the lead track on his forthcoming debut EP, is quintessential Casey. A driving beat, an earworm hook, a lilting melody, and lyrics whose humour and playfulness - two very strong and ever-present facets of Casey’s own personality - cannot quite paper over the pain. Casey has spent the past few months hunkered down in a south London studio, writing and recording with David McEwan, James Turner and is impatient to get the results out there. On one of the new songs, he enlisted the incendiary vocal talents of four members of the London Gospel Choir. “Even just listening to them sitting there, working out the vocal harmonies, was humbling. David was in tears. Ok, I was, too. You can’t believe the sounds coming out of their mouths.”

Talk to Casey about his poster-boy good looks and he’ll laugh it off, but he will also make it quite clear how aware he is of the dangers of being over-styled, and turned into something he isn’t. “It’s not happening, he says, bluntly. Not that he’s averse to some decent clobber. On the contrary. “If you saw me in, say, a floral suit,” he laughs, “that’s because I’d wear that sort of thing anyway. It’s not going to be as a result of someone barking at me, ‘Wear this! You will look this way’.”

Casey still goes back to Chesterfield regularly, he says: the town is in his blood, and his heart. He has an ease to him, a naturalness, that the big smoke hasn’t tarnished. “My dad still can’t process what’s happening. I go back home and he says, ‘What’ve you been doing down there, then?’, and I’ll say: ‘I’ve got a lawyer and all sorts now.’ I’m not sure he believes me.” The bedroom-studio dreamer has survived the move to London, too. Casey admits that he still has moments where he drifts into reverie, into philosophical musing (appropriate, for a man who once, he says, “spent two months living in a cave in Budapest - as you do.”)

“Sometimes I feel like I’m a hippie in a non-hippie body. I can be walking down a street and I’ll think something like: ‘Does that tree know about the other tree over there?’ And then I’ll think: ‘What am I turning into?’ My drummer says I’m nuts.” And is his drummer right? “Possibly!” But there’s a hard-grafter and a fierce talent in there, too, alongside that dreamer. The boy in the bubble who got a U in Music is ready for his retakes, and stepping out into the world.

"What’ve
you been doing down there, then?” Casey’s dad asked. We’re about to find out.